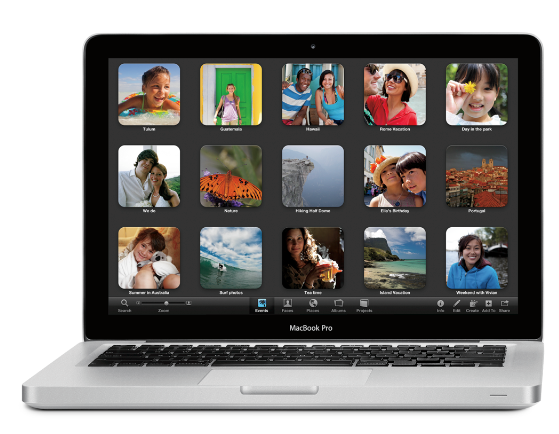 Somewhat overshadowed by the Retina MacBook Pro, the refreshed, original case-design Ivy Bridge range of Apple laptops, released simultaneously with the Retina MBP at June’s WWDC Keynote, doesn’t seem to have received a great deal of attention in the media. So, having had to make the difficult decision this month to put my ailing, late-2007 Santa Rosa MacBook out to pasture for one of the new models, I thought I’d share the experience. Of the reviews that do exist, most will undoubtedly have focused on how the new hardware compares to the version that came directly before it. Yet who in the real world buys a new computer to replace the one that came out merely months before? Surely more people are going to be interested in how much of an improvement the new machines are over a four or five year old MacBook that’s nearing the twilight portion of its operating window and thus needs to be replaced.

First impressions
After much soul-searching, I’d chosen to replace my late-2007, 13″ white MacBook 2.1GHz Core 2 Duo with the new 13″ Ivy Bridge MacBook Pro, with the snappy 2.9GHz i7 processor, 8GB of RAM and 750GB hard drive. The first thing I noticed on removing the MBP’s box from its cardboard sleeve was how dinky it was compared to the packaging of its predecessor. Not just the computer, the whole package is noticeably smaller and lighter.

Once divested of its box and opened up for the first time, the next thing to hit you is that the screen is just so shiny compared to that of the older Mac – when the display goes to sleep while in battery mode, glancing down at the screen is like looking into a dark mirror, which as anyone who knows me personally will confirm, is a disconcerting image to be suddenly presented with at any point in the day. The overall brightness of the LED display punches through this in use, however, and I haven’t yet found a situation where the reflectiveness of the screen has caused a problem.

The anodized aluminium casing is quite slippery compared to my old beast’s grippy white polycarbonate body, and I keep worrying that I might scratch it on the zips or velcro of my laptop bag, or that my cat will walk across it when the lid is closed and leave clawmarks. At a shade over 2 kilos, the new machine is 250g lighter than the one it’s replacing, and fractionally thinner.

It lives!
On first powering up, the main disappointment was the bootup speed. Now don’t get me wrong – with its 2.9GHz i7 processor, this thing is fast, but the boot time wasn’t as blazingly quick as I expected it to be after months of practically having to shovel more coal into the back of my white MacBook to get it to start up.
Next thing was to transfer all my stuff across from the older machine. Now, Migration Assistant. It’s a great tool, it really is, but I’ve now learned that if you’re going to duplicate the contents of an older Mac with a 160GB hard drive that’s bursting at the seams – USE ETHERNET! Just transferring my Applications and Documents folders over my local WiFi network took over 8 hours. I haven’t even attempted to transfer my iTunes or iPhoto library yet.

Getting to know you
Once I began using the new machine in earnest, launching Safari was one of the bigger revelations. It just appears on your screen within a second of clicking the logo in the dock or Launchpad. Logic and Cubase too were miraculously quick, after having got through the headache of enabling and reauthorizing all my plug-ins. Photoshop, too, which I used to have to launch, then go and make a cup of tea and come back to find ready and waiting, was noticeably swifter to get going.

Battery life so far I have to admit I’m not all that impressed with – currently registering 40% charge after less than two-and-a-half hours of light use. I have yet to get a confirmed figure on how long it actually lasts under normal use conditions, but it isn’t holding up as well as I’d hoped so far. It did have Bluetooth enabled by default, which didn’t help matters, and there’s a chance that the recent Apple Software Update might have improved things, but as yet it’s too early to tell. Still at least it has a battery – my old machine has been plugged into the mains for over a year now. It’s great to have a portable system again, and for someone like me who often needs to get work done on the go, the freedom it gives you to work wherever and whenever you like is priceless.

The fan on the new MBP makes a rather bizarre noise, not anywhere near as screamy and intrusive as the old machine, which by this point in its life is maxed out like a jet engine more often than not, but it’s a constant, low-level, wide-bandwidth rush of pink noise, sounding just like a train passing half a mile away. A very very long train. Also, the wake from sleep time is decidedly non-snappy compared to the old machine, but at least I don’t have to wait 10 seconds for the cursor to become active once the screen has returned to life.

The backlit keyboard is just a joy to behold, particularly when working in dim hotel rooms late at night, but it sucks life out of the battery like Thirst Pockets soak up water spills. I love the glass trackpad with its integrated button, and it’s nice to finally have a machine with which I can get to grips with all the multi-touch gestures. It does mean, however, that I finally had to bite the bullet and enable reverse scrolling, which in some areas is totally intuitive and fine and lovely, and in others (editing the piano roll in a DAW like Logic, for instance) JUST DRIVES ME MAD!! My current mantra is “Push the content where you want it to go” whenever I move anything on the screen. Hopefully it’ll soon sink in.

One of the biggest luxuries, apart from the speed with which the apps launch, is glancing down at the status bar at the bottom of the Finder window (I have to have this enabled or I will wither and die) to see that there’s 650GB of hard disk space free, rather than just 6GB. When you regularly review stuff as part of your living, you need a lot of disk space to handle whatever gets thrown at you from week to week.

Hardware-wise, I was disappointed to note that, on the 13″ model at least, the audio line in and out ports have been merged into one multi-purpose minijack socket, which might make it awkward if I ever need to plug something into the line input and monitor with headphones at the same time. Round the other side, my maiden voyage of a roundup of eight drum pad MIDI controllers, involving the need to install umpteen attached drivers, software and content packs, made me glad that this model, at least for now, has retained a built-in optical drive. This will also prove invaluable when burning rough Logic, Pro Tools and Cubase project mixes to CD for checking in the car, as my ten year-old motor has a superb Harman Kardon sound system, but has never heard of an mp3.

I don’t yet have any USB 3.0 or Thunderbolt peripherals, so I can’t report anything on the speed increase there as yet. The screen-mounted 720p HD FaceTime camera, though, is just fantastic, determined to disclose every last grey hair and wrinkle you possess.

Much has been made of the integrated Intel graphics not being up to the task of a ‘Pro’ machine, but apart from one slight wobble when scrolling Facebook pages in Safari, I haven’t had any graphics issues, so hopefully the sudden, random rearrangement of portions of the screen into reversed and inverted segments that I occasionally experienced on the old machine is now a thing of the past. I’m currently resisting the urge to try it out using the new Tomb Raider game as an assessment tool – not sure if I can justify that one!

Every now and then an accidental brush from a waving fingertip across the trackpad will provoke a totally random and unexpected response from whatever’s on screen, but that’s probably more to do with the fact that I’m not yet conditioned to appreciate all the clever tricks that multitouch is laying out before me. Once you’ve discovered the little paper document that outlines the fundamental gestures available, they do come in handy. My favourites are the four-fingered reverse pinch to reveal the desktop, something I always do a lot of anyway, and the two-fingered click to Ctrl-click for contextual menus and the like, very useful for instantly bringing up Cubase’s toolbox beneath your cursor a la 1993 Atari 1040ST. You do have to be gentle though, otherwise the trackpad clicks and you don’t get the result you were expecting! 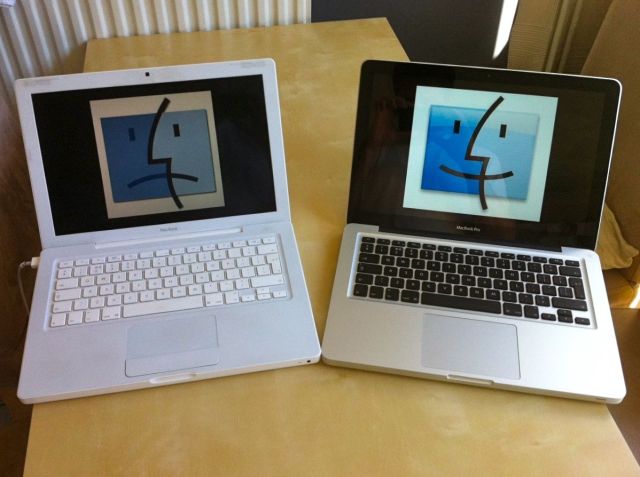 Laptop Face-Off
Here are some totally non-scientific, real-world comparisons that I performed with both machines side by side. You might suggest that the difference in onboard RAM capacity skews the results somewhat in favour of the newer machine, but that’s the point. Both these machines are original spec, mid-high range models so from the point of view of an everyday user, the comparison is valid. Overall, this is just a representation of the average performance gains you can expect when replacing a 4-5 year old model.

Conclusions
Quite bizarrely, owing to the circumstances by which I came into possession of this machine, I started out not being excited about it at all. I’d been holding out for a gorgeous big iMac, and it was hard to get enthusiastic having been forced to drop a huge amount of money on what will effectively become my secondary computer. But I have to say, in all honesty, that the shiny little beast is winning me over, and it has now drawn from me a sort of grudging admiration and respect. Now that I’ve completed my first few projects on it, and having had occasional recourse to visit my old MacBook from time to time, the difference in performance is really quite staggering. It’s astounding how much we take for granted things like sufficient RAM and copious disk space when we have it, and how much we miss it when we don’t. Some might equate an upgrade like this to changing your car because the ashtrays are full, but it’s true to say that, in this case, the old Mac had been pushed to the brink for far too long, to the point where I was having to turn down work because my hardware wasn’t up to the job.

Essentially, this machine has allowed me to continue working on new projects centring on Mountain Lion that neither of my older Macs could support, so it will undoubtedly have paid for itself within the next couple of months or so. If you’re in a similar position to the one I was in, constantly having to offload files onto an external drive to make enough room to continue working and becoming exasperated by the treacle-like performance of a machine pushed way beyond its specified limits, I would have no hesitation in recommending the Ivy Bridge MacBook Pro models. If you don’t need the Retina display, don’t sweat it – beautiful, capacious, responsive and a real joy to use, the regular MBP’s are more than equal to the task, whatever it may be.