One of the most exciting news items to come out of the NAB show in Las Vegas this week has been Avid’s announcement of the all-new Pro Tools 11. A completely rewritten, 64-bit application with all-new code and a brand new Avid Audio Engine (bye, DAE!) under the bonnet, this audio and music production, editing and mixing powerhouse takes things up to the next level, with the promise of more processing power, more tracks, more virtual instruments, more complex instruments – just more, basically. The 64-bit architecture promises better memory management, with the ability to address as much RAM as your computer can hold, and all-round much slicker performance, particularly in complex sessions with lots of virtual instruments and effects. But, apart from being 64-bit from the ground up, what else is new? Has someone at Avid been listening? Has all the stuff that’s driven us PT users nuts for years finally been addressed? Here’s a closer look at some of the new bits and pieces to be found in Pro Tools 11.

Offline Bouncing
Offline bouncing is here at last, which will have many users literally jumping for joy. The days of watching the progress bar crawl across the screen as the computer wrestles with a real-time bounce of a complex orchestral mix or an hour-long podcast, (only to throw up an error at the last minute, requiring the whole process to be started again through a blurry veil of frustrated tears) are finally drawing to a close. Offline bouncing promises to deliver mixes at speeds up to 150 times faster, which means an hour-long program could be rendered in under one minute. This is sample-accurate offline bouncing to boot, so you always know exactly what you’ll end up with. Stem creation looks like it’s about to get a lot less painful, and it looks likely to be useful as a track freeze function too, a quick way of lightening the CPU load caused by memory-hogging virtual instrument tracks. You can also bounce a .WAV and a .mp3 version simultaneously in PT11.

Timing Tweaks
Elsewhere, Avid have sought to stamp out latency issues by implementing both an input and an output buffer, so that  delays introduced by complex processes can be compensated for at the output stage. This all happens transparently, so that by the time it reaches your ears, everything should be in perfect time. To reduce monitor latency when recording, PT 11 has domain latency switching which allows for input-enabled virtual instrument and record channels to employ a super-low, 32-sample buffer while playback tracks operate at whatever your current system buffer settings are. Clever!
Time-stamped plugin parameter automation means that now every automation move will happen exactly when it’s supposed to, rather than a few frames either side of the intended position, which can apparently happen with some current systems when a bounce is rendered.

From Meter You
Pro Tools 11 introduces a batch of new metering systems for Pro Tools HD users – a total of 17 industry-standard metering options are available in the top-end version of the software, including standard VU metering, BBC and Nordic PPM metering, and even Bob Katz’ K System. The master track meters can have their format set independently from the rest of the Mix window, and mini meters now appear on the plugin slots in the Sends view. You’ll also now find a configurable gain reduction meter for dynamics plugins on each channel in the HD version. The channel meters themselves are much higher resolution and also 30% taller than those in PT10.

Video Star
Video handling is also much improved, with Pro Tools 11 adopting the same video engine as that found in its sister app Media Composer, which was also updated this week. You can now monitor and even edit HD video directly within your Pro Tools sessions. You can add a variety of broadcast level formats (XD Cam, MXF HD, Avid DNxHD) directly to your session without transcoding, which is a real timesaver. There’s also improved support for a much wider range of video interfaces than before, including equipment from AJA and Black Magic.

Bits n Bobs
There’s a host of other tweaks and enhancements alongside the big guns. Dynamic Host Processing cleverly reallocates processor resources away from tracks when there’s nothing playing on them. There’s an updated workspace browser with a faster, improved search feature, and you can now input automation data whilst recording – great for recording live sound. This automation data can also be converted to clip gain when mixing a project.
There’s a set of new, single-handed shortcuts for bypassing inserts – great for quick before / after comparisons of channel strips with long plugin chains. You can bypass all inserts with one keystroke (Shift +A), or use different commands to bypass by placement or category. Graphically, the system now supports Apple’s Retina displays and there have been some visual tweaks to the Mix window.

Notably, PT11 only supports the AAX plugin format – RTAS & TDM plugins are no longer supported from this version onwards because they are all 32-bit code. PT11 is all 64-bit code, so older plugins may need to be sacrificed for the sake of progress, at least until AAX upgrades of those plugins become available. A tough call for UAD users. Interestingly, you can run both PT10 & PT11 on the same machine, which offers a temporary workaround to bridge the transition, but if you’re a Mac Pro user, that machine has to be newer than the March 2009 (Mac Pro 4,1) model. Pro Tools 11 requires OS X 10.8.3 or newer, and an iLok2 USB dongle is required for copy protection.

So, no new plugins or instruments then, but rather a completely overhauled application that promises to provide a smoother and faster workflow, as long as you can take the ‘no RTAS’ hit. Pro Tools 11 is expected to ship in May / June 2013, but anyone who purchases and registers a copy of PT10 between 7th April and the release date will receive a free upgrade to 11 when it ships.

Pricing
Pricing will be as follows: 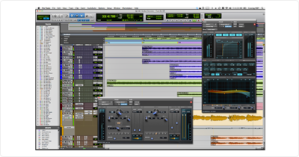 Avid have officially released Pro Tools version 10.3, which adds support both for OS X Mountain Lion and the newly-announced HD Native Thunderbolt interfaces, discussed in the earlier post below.

From Avid’s website:
Pro Tools Version 10.3 is an officially qualified and recommended installer for:

The website also mentions that, although this version of Pro Tools is now qualified for Mountain Lion, if you own a Mac Pro, it’s only officially supported on computers with Nehalem processors onwards. In other words, if your Mac Pro dates from earlier than March 2009, you’re outta luck.
Another caveat is that Pro Tools non-HD device drivers (such as drivers for M-Audio FireWire interfaces, Mbox 2, Mbox 2 Micro, Mbox 2 Mini, Mbox 2 Pro, & Pro Tools Mbox Mini) are not yet officially supported with Mountain Lion.

Pro Tools 10.3 is available for registered users to download from here.

Avid, creators of the legendary Pro Tools audio recording, editing and mixing system, last week furthered their quest to eliminate the inherent latency of typical USB and FireWire audio interfaces by announcing a pair of new Pro Tools HD Native interfaces that take advantage of the ultra high-speed Thunderbolt connection standard found on the current crop of computers.
Don’t get too excited though, because even if you were able to purchase one of the new Thunderbolt interfaces, which come in either desktop box or PCIe core card format, as a single item, you’d still need to purchase an additional Pro Tools HD I/O audio interface to hook it up to. As it is, you can only buy them as part of a bundle – the new ‘interfaces’ do not have any audio in or out connections themselves, they’re just bridging devices, a means of utilising the speed of the data throughput of the Thunderbolt port on current computers, in preference to latency-prone USB and FireWire ports. This means that the price of the cheapest available bundle, consisting of Thunderbolt interface, Pro Tools 10 software and compatible HD OMNI audio interface, comes out at a whopping $4999USD (around £3300GBP).

For the moment at least, Avid are not offering the unit on its own to accommodate the needs of END_OF_DOCUMENT_TOKEN_TO_BE_REPLACED

Avid today unveiled their next generation of Pro Tools professional audio recording, mixing and editing software and hardware. Pro Tools 10 software offers over 250 new features, enhancements and improvements, including changes in the way it handles audio files on your hard drive, the ability to load and playback sessions from RAM, realtime fades (farewell, fade files!), clip gain, new AAX plugin architecture and many more. The new hardware delivers 5x the DSP performance of an HD system, higher resolution, larger track counts, more headroom…. just lots more of everything by the sound of it!

Exciting stuff, can’t wait to try it out. Now, what was Avid’s phone number again?