The Imagine bookazines are always great value for money, packing a wealth of information into substantial volumes that really shine a spotlight onto the inner secrets of Apple’s iDevices. I’m pleased to announce that iPad Tips, Tricks, Apps & Hacks Volume 9, on sale from today, is no exception. All in all, I wrote 20 pages of material for this volume, in the shape of 10 double-page tutorial spreads. Subjects I contributed include how to use your iPad to:
– Get the latest sports news wherever you are
– Learn how to speak a new language
– Discover and collect tasty recipes
– Learn basic coding skills in just 60 minutes
– Read the night sky like an expert astronomer
– Manage all your bills and budgets
– Store and share your files on the go
– Scan and share PDFs with others
– Access a Mac computer from your iPad
– Protect your device and its data

So if you feel like unlocking the full potential of your iPad, iPad Air or iPad Mini, why not grab a copy? 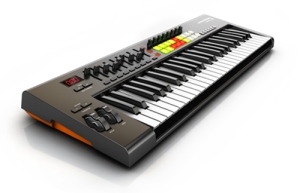 Novation will use NAMM 2013 as a platform for taking the wraps off a slinky new range of DAW controller keyboards. Available in 25, 49 and 61-note varieties, the Launchkey series forms a compelling lineup, each consisting of a professional MIDI keyboard boasting 16 velocity-sensitive, multi-colour clip launch / drum pads, bundled with Ableton Live Lite 8, Novation Bass Station and V-Station software synths and a pack of Loopmasters samples. Hardware controls include nine faders (one fader on the 25-key model), eight mute/solo buttons, eight rotary knobs, a 3-digit LED and a dedicated DAW transport controller section.
Compatible right out of the box with all major DAW’s such as Logic, Live, Cubase, ProTools and FL Studio thanks to Novation’s new InControl integration system, the keyboards are bus-powered via your computer’s USB socket, or from an iPad by means of the optional iPad Camera Connection Kit, available for around £25 from Apple.
Each package also includes two new iPad apps, designed to work in conjunction with the keyboards. The Launchkey app is an iPad 2 & upwards-compatible performance synth, while the Launchpad app delivers drag-and-drop loop playback from the pads and real-time filter and stutter effects.

The Novation Launchkey keyboards are slated to become available in the UK from March/April onwards. 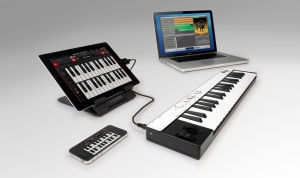 Just when you think they couldn’t possibly dream up any more iOS-compatible musical accessories, IK Multimedia come up with yet another in their long line of i-Prefixed goodies. This time it’s iRig KEYS, announced yesterday.
A slim, 3-octave controller keyboard for iPhone, iPad and Mac featuring 37 velocity-sensitive mini keys, proper pitch bend and mod wheels and a sustain pedal input, iRig KEYS allows connection directly to the iPhone or iPad’s 30-pin connector, obviating the need for Apple’s Camera Connection Kit accessory required by regular USB controller keyboards.
iRig KEYS is Core MIDI and USB class compliant for a true plug-and-play experience both with iOS devices or Mac/PC, so no additional app, software or drivers need to be installed to get it up and running. When hooked up to an iPhone, iPod touch or iPad, it can be powered by the device for total portability. For longer playing sessions it can be powered by the available USB port, which also powers the unit when connected to a Mac or PC.
The device works either with the included app and software or with a multitude of other MIDI-compatible DAW apps on any iOS, MacOS or Windows system. As a bonus, the package includes SampleTank Free for iOS, or SampleTank 2 L for Mac & PC, which includes over 2GB of sampled sounds. When it hits the dealers’ shelves this Autumn, iRig KEYS will be available for €74.99 (around £60 GBP).

Could this be the iOS answer to ProTools?

This week marked a pioneering iOS app release in the shape of Auria from WaveMachine Labs. For what I’m led to believe is an introductory price of £34.99, this astonishing app will transform your iPad into a fully professional digital multitrack recorder and mixer, complete with effect plug-ins. iPad 2 or 3 owners can benefit from an incredible 48 tracks of audio playback, while iPad 1 users are limited to 24, which is still not to be sniffed at.

In addition, AAF import & export promises the transfer of complete projects to and from other END_OF_DOCUMENT_TOKEN_TO_BE_REPLACED 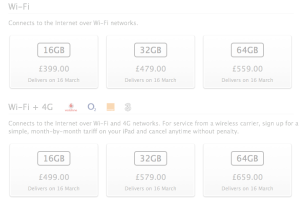 Just a quick update to yesterday’s new iPad announcement. Official UK prices for the new iPad are as shown in the image, starting at £399 for the base 16GB WiFi-only model and rising to £659 for the top-of-the-range 64GB WiFi + 4G version. Details of data plans for the 4G models, and their associated costs, can be found at http://store.apple.com/uk/browse/home/shop_ipad/family/ipad/select_ipad

iPad musicians sit up and take notice: The stylish Griffin StudioConnect gives your iPad audio in/out, MIDI in/out, and a stereo headphone jack. Coupled with a nifty integrated dock that gives your iPad a stable and convenient place to sit and charge up while you’re recording, this device looks like the ideal solution for capturing those fleeting musical ideas while on the move.
You can plug a guitar into the StudioConnect’s mono 1/4″ instrument jack and play directly into GarageBand or other music recording apps. Or plug a recorder or mixer into the StudioConnect’s stereo 3.5mm input jack and connect the whole band to your iPad.
Line-level stereo audio-out comes via rear-mounted left and right channel RCA outputs, while the front panel sports a separate front-panel 3.5 mm stereo headphone jack with its own volume knob. Standard 5-pin MIDI In and Out ports complete the lineup, together with a socket for an external power supply. With an RRP of $149.99 USD, the best part is, it works with both the iPad and the iPad2 (and presumably the iPad3 when it arrives later this month!)
Can it give the slightly more expensive and more fully-featured Alesis IO Dock a run for its money? Only time will tell…