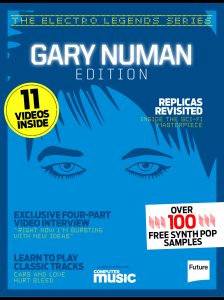 The third, and as it turns out final, instalment of Future Publishing’s Electro Legends Series of digital magazines is now available to download. This time around the focus is on Gary Numan, looking both at his earlier iconic works and also featuring a sneak peek or two at his latest album of new studio material, Splinter (Songs from a Broken Mind). My contribution to this edition takes the form of separate video tutorials on how to program synth sounds from two Numan tunes, old and new. Firstly, I demonstrate how to recreate the famous Polymoog lead sound from Gary’s 1979 hit ‘Cars’, swiftly followed by a breakdown of one of the main synth sounds from one of the new album tracks entitled ‘Love Hurt Bleed’.

The digimag also features a four-part video exclusive with the man himself, as well as a 3D video exploration of classic album Replicas and a look at Gary’s synths. It’s available through the free Computer Music and Future Music iPad or iPhone apps at a very reasonable £1.99. Go get it! 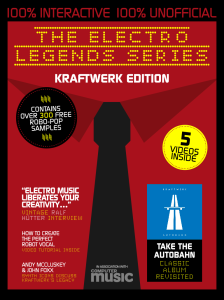 Now, this is an interesting one. Future Publishing have embarked on a new, digital-only venture focussing on legendary synth-pop pioneers. The Electro Legends Series kicks off with a study of German legends Kraftwerk, in the form of a digital magazine, which is available now from within the iOS apps of Computer Music and Future Music magazines.

It’s the first in a new range of digital specials, which is also due to profile artists such as The Prodigy, Hot Chip, Depeche Mode and Gary Numan.

The unofficial app contains interactive features that will appeal to both music makers and regular fans of the artists. The Kraftwerk edition contains a classic interview with founder Ralf Hütter, a contemporary live report, Autobahn revisited, exclusive analysis by OMD’s Andy McCluskey and Ultravox founder John Foxx, plus videos, tutorials, samples and more.

I was honoured to be asked to provide a four-step video tutorial for this pioneering publication, in which I demonstrate how to get the perfect Kraftwerk-style robot vocoder vocal sound.

The Electro Legends Series: Kraftwerk is available now for £1.99. To buy it, simply download the apps of either Computer Music or Future Music.