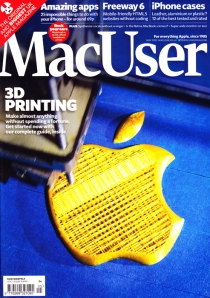 One Thursday night back in 1978, when I was 10 and first really getting into music, I witnessed a band on Top of the Pops called ELO playing a song called Mr Blue Sky. The middle 8 came in with its vocoded vocal and my pre-adolescent mind was instantly blown. Vocoders have been one of my favourite things on the planet ever since, and it’s long been a mild frustration of mine that GarageBand, a piece of software that I know and love well through my monthly iCreate tutorials, has not had the ability to produce a decent vocoded vocal. So, I made it my personal mission to try and perfect a technique that would not only make this possible, but that would produce great-sounding and properly useful results.
Yes, in the May 2013 issue of the new-look, bigger, monthly MacUser magazine, I take up six whole pages of the posh, shiny new paper with a step-by-step guide to producing coherent, computer-generated vocals in GarageBand without a vocalist or microphone anywhere in sight. It’s all thanks to one particular freeware third-party plug-in that happens to function in such a way that GarageBand’s lack of signal routing options no longer poses a problem to cash-strapped would-be vocoderists.
Beginning on page 78, this colourful and informative guide takes you through the entire process from scratch, starting by generating the source vocal as spoken text and ending up with a finished lead or backing vocal generated entirely within your Mac.
So if you’re a GB user who fancies a bit of vocoding fun (and it’s great fun, trust me!), get your May 2013 copy of MacUser today!