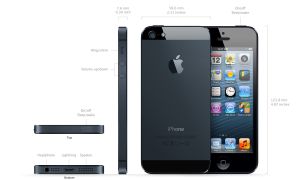 Apple announced the long-awaited iPhone 5 at its media event at the Yerba Buena centre in San Francisco earlier today. With a case made entirely of glass and aluminium, the new iPhone is lighter and 18% thinner than before, measuring just 7.6mm thick. Touted as the world’s thinnest smartphone, it weighs in at just 112 grams, 20% lighter than the iPhone 4S. Its 4″ Retina display has an 1136 x 640 pixel resolution, which gives the screen room for an extra row of app icons at the top. All the factory apps have been optimized to show more stuff on the taller screen, including the iLife and iWork apps, while non-optimised apps run letterboxed, ie with black borders either side. There’s 44% more colour saturation, and the fact that the screen is taller whilst remaining the same width as before takes the screen closer to a 16:9 aspect ratio for better widescreen movie viewing.

There’s ultrafast wireless connectivity with LTE, which has a theoretical maximum of 100MBps, and a dynamic antenna that can switch connections automatically. Network wise, it’ll be on the O2 network here in the UK. The new device also features better WiFi performance with 802.11 a/b/g/n, dual channel up to 150MBps.
Under the bonnet, there’s a new dual-core chip, the A6, which is reputed to deliver 2 x faster CPU and graphics performance compared to the A5. This new chip is 22% smaller and more energy efficient, enabling you to launch Pages 2.1x faster, save images from the Photo app 1.7x faster, and load the Music app 1.9x faster.
The iPhone 5 boasts improved battery life over the 4S model – 8 hours of 3G or LTE talk time or browsing, or 10 hours browsing on WiFi.

The rear camera is now 8 megapixel, 3264 x 2448 with backside illumination, a hybrid IR filter, and a 5-element lens with f/2.4 aperture. Image capture is reckoned to be 40% faster, and the new image processor in the A6 chip is there to help reduce noise. The camera has a sapphire crystal lens cover, includes a ‘smart filter‘ to facilitate better colour matching, and Apple claim better low-light performance too.
An innovative Panorama mode lets you grab extra-wide images by sweeping the phone across the vista for a 28MP resulting image, and Shared Photo Streams let you share a series of photos instantly with family and friends.

The rear camera also shoots video at 1080p HD with improved stabilisation, face detection and the ability to take still photos while recording video. The front-facing Face Time HD camera is 720p with backside illumination and face detection, and FaceTime is now available over cellular networks. Three microphones are featured – front, rear and bottom edge – and there’s a noise-cancelling earpiece, while wideband audio is said to improve the tone and clarity of your voice during a call.

The ubiquitous 30-pin iPhone dock connector was the original iPod connector and has remained unchanged since 2003. The new connector on the iPhone 5 is called Lightning – so now we have Thunderbolt and Lightning. An all-digital, 8-signal design, the connector is reversible and not only 80% smaller, but also thinner and more durable. Apple are creating a bunch of accessories and adapters to get around the compatibility problems likely to be faced by the millions of users worldwide with older docks and accessories that are incompatible with the new phone.

The iPhone 5 is available with either a black or white front finish. The white model has an aluminium back, while the black one has a black anodized rear case.

US on-contract prices are: