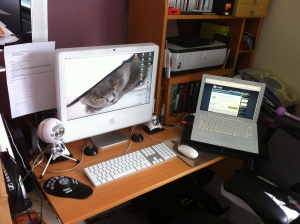 It's big, it's bright, it's at the right height!

The Beast is Back! After a six month sabbatical, my white iMac is finally back where it belongs, front and centre on my desk. It succumbed to the notorious Swollen Capacitor Syndrome last September, a costly repair that I had to put off due to lack of funds until last month. After four weeks at the menders, it’s great to have it back, but…. all is not quite what it seems.
A big ‘thanks dude’ is due to Carl Folker at MacLogics in Peterborough, who after discovering that my old friend was ultimately beyond repair, substituted a newer Intel machine in place of my original G5 unit, cloned my 200GB’s of data off my hard drive, reformatted it so it would work properly in the new machine, then cloned it all back. So this iMac looks and feels exactly like my old machine, except it’s faster, has more RAM, and since it has an Intel Core 2 Duo processor under the hood, it can now run OS X 10.7 Lion. Result! The old machine had been stuck at OS X 10.5 Leopard due to its G5 processor, and when I mentioned that my Leopard Install DVD had been stuck in the original machine’s optical drive, Carl even fished it out and dropped it off at my house personally!

It’s big, it’s bright, it’s at the right height!
Ergonomically the return of Big White is a huge bonus. My upper vertebrae and my white Macbook have both been feeling the strain of the laptop taking on everything I could throw at it recently, soaking up reviews of DAW’s like Cubase 6.5 and massive sample libraries like Sonokinetic Vivace, along with huge plug-ins like AudioEase’s Altiverb 7 convolution reverb. My trusty MacBook has helped me produce countless tutorials and features on a weekly basis, not to mention getting this blog up and running. Now that its hard drive has only 6GB of free space left, I think it might be time to let its bigger brother take the strain for a while!